Hammocks have been around for hundreds of years. Some of the first accounts are as early as the 13th century when Columbus sailed the seas, but they’ve probably been around for many years beforehand. Fast forward a couple years to the 1880’s where riverboat Captain Joshua John Ward wasn’t very fond of sleeping in a hot canvas hammock every muggy, South Carolina night on his ferry headed to and from Pawleys Island. It was rough, cramped, hard to get into, and not to mention prone to tipping. Enter the idea for the rope hammock.
After a lot of trial and error he stumbled upon his winning design of thick cotton rope in a double-latch weave producing the lattice-like design that we’re all familiar with today. He then added the wooden slats to spread the hammock bed wide and there you have it, the Pawleys Island Hammock. Obviously since then, hammock designs have been innovated and modernized into quilted fabric hammocks, and single-cushion chair hammock versions. Pawleys Island Hammocks are the perfect way to relax outdoors. The Original Rope Hammocks stay true to the tradition of Cap’n Josh’s original woven design for the type of breathable comfort you don’t have in most other leisure furniture, and it’s the most affordable hammock we offer here at Christy Sports, with no lack of quality. It’s made with a cotton rope for softness, compared to regular rope, and is ideal for taking up minimal space when it’s in storage for the winter months. Next in line from Pawleys Island is the Quilted Fabric Hammock, which provides more padded comfort than the traditional woven one, and has a much longer life expectancy. It consists of two sheets of specially designed all-weather fabric that is quilted together over a cushy polyester fiber-fill batting, giving you weather-tough, reclining comfort that is rot-, mold-, and mildew-resistant. It also comes in a stylish striped pattern to accent any leisure location you desire. The wide design of these hammocks have been specially engineered to help avoid tipping you onto the ground like in the cartoons you grew up with, however to help avoid falling altogether, it’s recommended that you place your weight in the center of the hammock and never on the sides. As far as climates go, rope hammocks are suggested for hotter weather since the open weave gives your body room to breathe. If it’s not quite so hot, you’d be fine with a quilted hammock for a more bedlike reclining experience. But no matter what you decide on, you’re only getting the finest quality! After all, Pawleys Island has been making hammocks since 1889.
More About Pawley's Island
Shop by Category 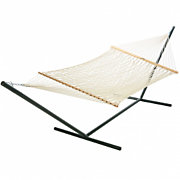 Your Personalized collection of favorite items

Add items to the collection builder to help organize and plan your future patio furniture purchase.

Use the "Add to Collection" button (

) from the item quick view or the item detail page to add items to your collection.

When your collection is complete, you can add the items to your cart, print them for reference or email them to safe keeping.